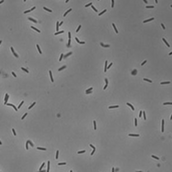 Thermoanaerobacter tengcongensis (T. tengcongensis) is a thermophilic eubacterium isolated from Tengchong, China. It is an anaerobic, Gram-negative, rod-shaped bacterium, able to survive in temperatures ranging from 50 to 80 °C. The genome sequence of T. tengcongensis was decoded in 2001, comprising 2.69 Mb in length and containing 2,588 predicted proteins. Previous studies of the proteomic response to growth temperature changes and thermo-survival of T. tengcongensis have been carried out with 2DE and MALDI-TOF/TOF MS. However, due to limitations of the technique, only few proteins with semi-quantitative estimation for the differential 2DE spots responsive to temperature changes are obtained. An improved iTRAQ-based quantification proteomics protocol has been developed, and using this method data produced to analyze the T. tengcongensis cultured at four temperatures: 55, 65, 75, and 80 oC. In order to obtain reproducible data, two biological replicates and multiple technical replicates (four times for the first sample preparation and three times for the second one) were carried out. Using the iTRAQ labeled sample analyzing procedure of high-pH RP HPLC coupled with LTQ Orbitrap Velos MS, 732,234 MS/MS spectra in total were obtained. The raw data were searched by Mascot 2.3, approximately 23% of the spectra were matched to peptides (FDR<0.01), while 0.5% less of the identified peptides were absent with the reporter tags. In total, 1,589 proteins elicited from 13,223 unique peptides, were identified with quantitative information, which covered 61.4% of the 2,588 predicted proteins of the T. tengcongensis genome. To study the abundance correlation between protein and mRNA, RNA-seq was carried out to study the transcription of the different cultured samples. Using Illumina HiSeqTM 2000 sequencing and the analyzing the raw data using SOAP2, the RNA-seq data covered approximately 97% (2501/2588) of the predicted genes, with more than two reads for each gene. These two datasets help show that the temperature-dependent responses of transcription and translation can happen in synchrony.