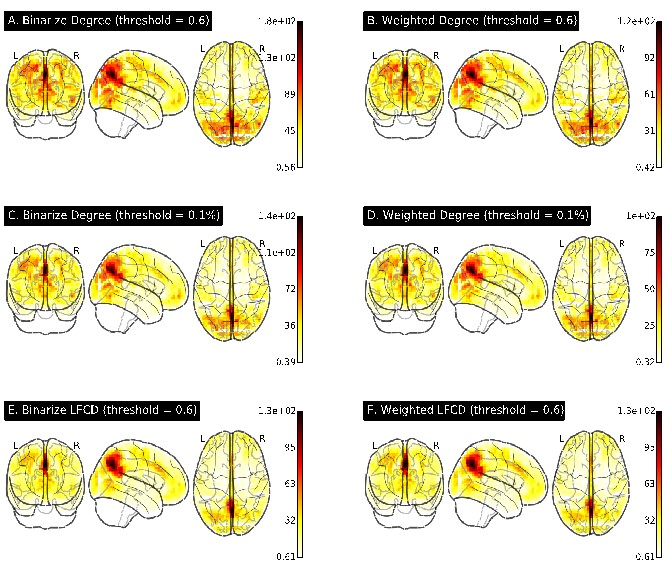 Degree centrality (DC) and local functional connectivity density (lFCD) are statistics calculated from brain connectivity graphs that measure how important a brain region is to the graph. DC (a.k.a. global functional connectivity density) is calculated as the number of connections a region has with the rest of the brain (binary DC), or the sum of weights for those connections (weighted DC). lFCD was developed to be a surrogate measure of DC that is faster to calculate by restricting its computation to regions that are spatially adjacent. Although both of these measures are popular for investigating inter-individual variation in brain connectivity, efficient neuroimaging tools for computing them are scarce. The goal of this Brainhack project was to contribute optimized implementations of these algorithms to the widely used, open source, AFNI software package.
Tools for calculating DC (3dDegreeCentrality) and lFCD (3dLFCD) were implemented by modifying the C source code of AFNI’s 3dAutoTcorrelate tool. 3dAutoTcorrelate calculates the voxel voxel correlation matrix for a dataset and includes most of the functionality we require, including support for OpenMP multithreading to improve calculation time, the ability to restrict the calculation using a user-supplied or auto-calculated mask, and support for both Pearson’s and Spearman correlation.
Outputs from the newly developed tools were benchmarked to Python implementations of these measures from the Configurable Pipeline for the Analysis of Connectomes (C-PAC) using the publically shared Intrinsic Brain Activity Test-Retest (IBATRT) dataset from the Consortium for Reliability and Reproducibility.