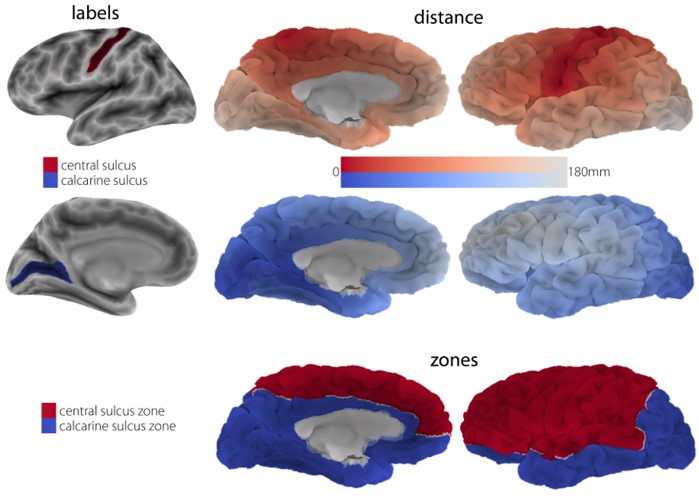 The human cerebral cortex, whether tracing it through phylogeny or ontogeny, emerges through expansion and progressive differentiation into larger and more diverse areas. While current methodologies address this analytically by characterizing local cortical expansion in the form of surface area, several lines of research have proposed that the cortex in fact expands along trajectories from primordial anchor areas and furthermore, that the distance along the cortical surface is informative regarding cortical differentiation . We sought to investigate the geometric relationships that arise in the cortex based on expansion from such origin points. Towards this aim, we developed a Python package for measuring the geodesic distance along the cortical surface that restricts shortest paths from passing through nodes of non-cortical areas such as the non-cortical portions of the surface mesh described as the “medial wall’.
The calculation of geodesic distance along a mesh surface is based in the cumulative distance of the shortest path between two points. The first challenge that arises is the sensitivity of the calculation to the resolution of the mesh: the coarser the mesh, the longer the shortest path may be, as the distance becomes progressively less direct. This problem has been previously addressed and subsequently implemented in the Python package gdist, which calculates the exact geodesic distance along a mesh by subdividing the shortest path until a straight line along the cortex is approximated.
The second challenge, for which there was no prefabricated solution, was ensuring that the shortest path only traverses territory within the cortex proper, avoiding shortcuts through non-cortical areas included in the surface mesh — most prominently, the non-cortical portions along the medial wall. Were the shortest paths between two nodes to traverse non-cortical regions, the distance between nodes would be artificially decreased, which would have artifactual impact on the interpretation of results. This concern would be especially relevant to the ‘zones analysis’ described below, where the boundaries between regions would be altered. It was therefore necessary to remove mesh nodes prior to calculating the exact geodesic distance, which requires reconstructing the mesh and assigning the respective new node indices for any seed regions-of-interest.
Finally, to facilitate applications to neuroscience research questions, we enabled the loading and visualization of data from commonly used formats such as FreeSurfer and the Human Connectome Project (HCP). A Nipype pipeline for group-level batch processing has also been made available . The pipeline is wrapped in a command-line interface and allows for straightforward distance calculations of entire FreeSurfer-preprocessed datasets. Group-level data are stored as CSV files for each requested mesh resolution, source label and hemisphere, facilitating further statistical analyses.
The resultant package, SurfDist, achieves the aforementioned goals of faciliating the calculation of exact geodesic distance on the cortical surface. We present here the distance measures from the central and calcarine sulci labels on the FreeSurfer native surfaces. The distance measure provides a means to parcellate the cortex using the surface geometry. Towards that aim, we also implement a ‘zones analysis’, which constructs a Voronoi diagram, establishing partitions based on the greater proximity to a set of label nodes.
The SurfDist package is designed to enable investigation of intrinisic geometric properties of the cerebral cortex based on geodesic distance measures. Towards the aim of enabling applications specific to neuroimaging-based research question, we have designed the package to facilitate analysis and visualization of geodesic distance metrics using standard cortical surface meshes.