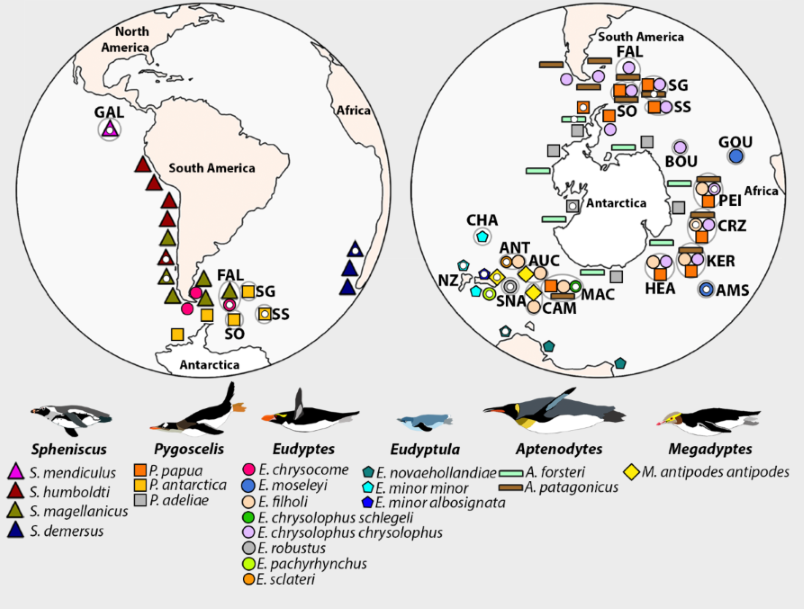 Penguins (Sphenisciformes) are a highly diverse order of seabirds distributed widely across the Southern Hemisphere. They shared a common ancestor with Procellariiformes about 60 million years ago, and have subsequently transited from flying seabirds to flightless marine divers. Approximately 20 extant penguin species are recognized across six well-defined genera, ranging from the Galápagos Islands on the equator, to the oceanic temperate forests of New Zealand, the rocky coastlines of the sub-Antarctic islands, and the sea-ice around Antarctica. To inhabit such diverse and extreme environments, this speciose order has evolved many physiological and morphological adaptations. However, penguins are also highly sensitive to climate change, and most species are already declining or are predicted to decline under future climate change scenarios. Therefore, penguins are an exciting system for understanding the evolutionary processes of speciation, adaptation and demography. Genomic data are an emerging resource for addressing questions about such processes. Here we present 19 new high-coverage genomes that, together with two previously published genomes also available in GigaDB, encompass all extant penguin species. As such, this dataset provides a novel resource for understanding the evolutionary history within penguins, and between penguins and other avifauna. We believe that our dataset and project will be important for cultural heritage and the conservation of this iconic Southern Hemisphere species assemblage. Comparative and evolutionary genomic analyses are currently being carried out, and the consortium welcomes new members interested in contributing to this work. While this work is still underway we have published these 19 penguin genomes to provide early-release, while requesting researchers intending to use this data for similar cross-species comparisons to continue to follow the Fort Lauderdale and Toronto rules.