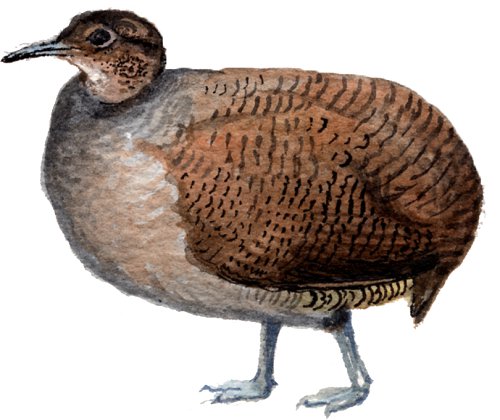 The White-throated Tinamou (Tinamus guttatus (Pelzeln, 1863)) is a native bird to the Amazon rain forest in Brazil, southern Venezuela, eastern Peru, northern Bolivia, southeastern Colombia and northeastern Ecuador. It belongs to the Tinamidae family, and eats fruit off the ground or low-lying bushes, as well as flower buds, invertebrates, seeds and leaves.
These data have been produced as part of the G10K and Avian Phylogenomics Project. DNA was collected from a vouchered tissue sample (B-42614) from the Louisiana State University Museum, of a female caught in Loreto, Peru.in the Loreto Department, Peru. We sequenced the genome to a depth of approximately 100X with short reads from a series of libraries with various insert sizes (170bp, 500bp, 800bp, 2kb, 5kb, 10kb and 20kb).
The assembled scaffolds of high quality sequences total 1.05Gb, with the contig and scaffold N50 values of 24kb and 242kb respectively. We identified 15,773 protein-coding genes with a mean length of 14.7kb