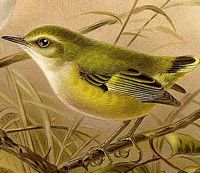 The Rifleman (Acanthisitta chloris (Sparrman, 1787)) is an endemic bird to New Zealand and is also known as New Zealand wrens, or Tītipounamu in Maori. It belongs to the Acanthisittidae family, and is one of two surviving species. The Rifleman is named after a colonial New Zealand regiment because its plumage is similar to the military uniform of a rifleman.
These data have been produced as part of the Avian Phylogenomics Project. DNA was collected from an animal found dead after in earthquake in Kaikoura, South Island, New Zealand, with tissue provided by Mike Bunce and Paul Scofield. We sequenced the genome to a depth of approximately 29X.
The assembled scaffolds of high quality sequences total 1.05 Gb, with the contig and scaffold N50 values of 18kb and 64kb respectively. We identified 14,596 protein-coding genes with a mean length of 13.5kb.