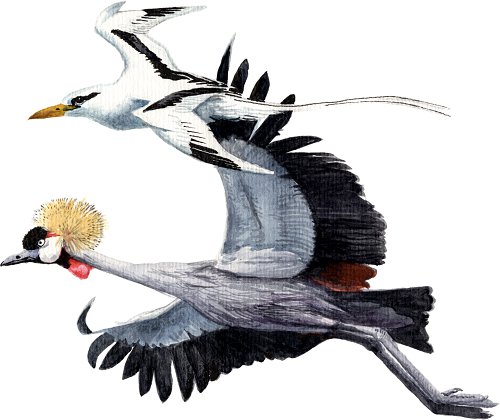 The Grey Crowned Crane (Balearica regulorum gibbericeps (Reichenow, 1892)) belongs to the Gruidae family of birds and can be found in the dry African savannah south of the Sahara, as well as in the wetter areas and grassy flatlands near lakes and rivers in Uganda and Kenya. The Crowned crane performs an interesting display when breeding that involves dancing, bowing, and jumping, as well as a booming call that involves inflation of a red gular sac on its throat.
These data have been produced as part of the Avian Phylogenomics Project. DNA was collected from a male at the Copenhagen Zoo (originally born Givskud Zoo) in Denmark, of an animal tended to by Mads Bertelsen. We sequenced the 1.45Gb genome to a depth of approximately 33X. The assembled scaffolds of high quality sequences total 1.14Gb, with the contig and scaffold N50 values of 18kb and 51kb respectively. We identified 14,173 protein-coding genes with a mean length of 13.8kb.