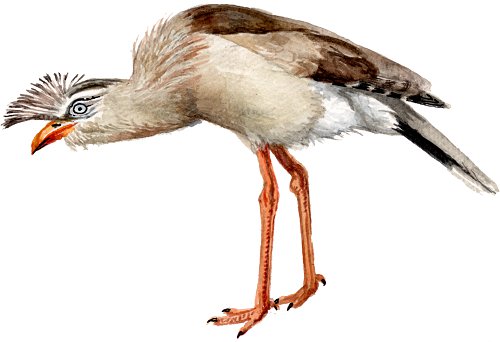 The Red-legged Seriema (Cariama cristata (Linnaeus, 1766)) is a predatory terrestial bird in the Cariamidae family. It is also known as the Crested Cariama. It is found in the grasslands of Brazil, south of the Amazon to Uruguay and northern Argentina. The Red-legged Seriema has a song described to sound like a cross between a bark of a young dog and a clucking of turkeys.
These data have been produced as part of the Avian Phylogenomics Project. DNA was collected from a male (left leg band # 295951) who had lived at the Copenhagen Zoo in Denmark (originally born in Noorder Dierenpark [Emmen Zoo] Holland), of an animal tended to by Mads Bertelsen. We sequenced the 1.5Gb genome to a depth of approximately 24X.
The assembled scaffolds of high quality sequences total 1.15Gb, with the contig and scaffold N50 values of 17kb and 54kb respectively. We identified 14,216 protein-coding genes with a mean length of 13.7kb.