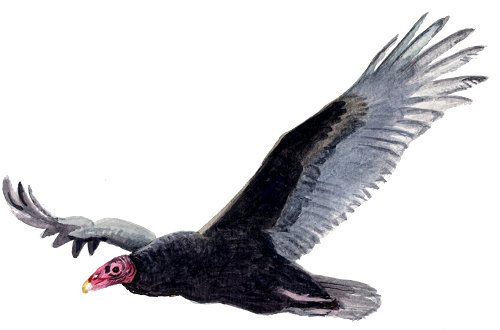 The Turkey Vulture (Cathartes aura aura (Linnaeus, 1758)), also known as the Turkey Buzzard in North America, is the most widespread vulture species. It lives in a range of open and semi-open areas, such as shrublands, sub-tropical forests and pastures. The Turkey Vulture is a scavanger, feeding exclusively on carrion - it flies low using its keen eye and sense of smell to detect the gases produced during the decay of dead animals.
These data have been produced as part of the Avian Phylogenomics Project. DNA was collected from a female in the Carolina Raptor Center, in Huntersville, North Carolina, USA (originally wild caught in North Carolina), with blood samples provided by Dave Scott of the Center. We sequenced the genome to a depth of approximately 25X.
The assembled scaffolds of high quality sequences total 1.17Gb, with the contig and scaffold N50 values of 12kb and 35kb respectively. We identified 13,534 protein-coding genes with a mean length of 10.8kb.