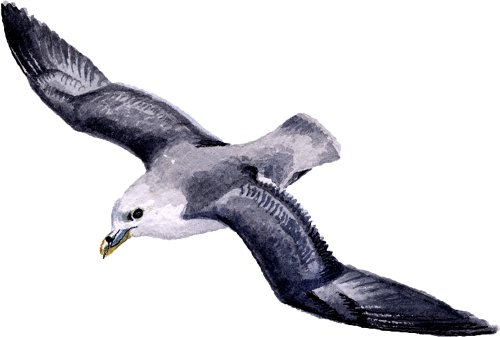 The Northern Fulmar (Fulmarus glacialis glacialis (Linnaeus, 1761)), also known as Fulmar or Arctic Fulmar, is a highly abundant sea bird and commonly found in north Pacific and north Atlantic subarctic regions. It is a member of the Procellariidae family, which include petrels and shearwaters, and like other petrels, the Northern Fulmar's walking ability is limited but is a very a strong flier.
These data have been produced as part of the Avian Phylogenomics Project. DNA was collected from a vouchered sample (137838) of Natural History Museum of Denmark from a male caught in Denmark. We sequenced the genome to a depth of approximately 33X.
The assembled scaffolds of high quality sequences total 1.14Gb, with the contig and scaffold N50 values of 17kb and 46kb respectively. We identified 14,306 protein-coding genes with a mean length of 12.8kb.