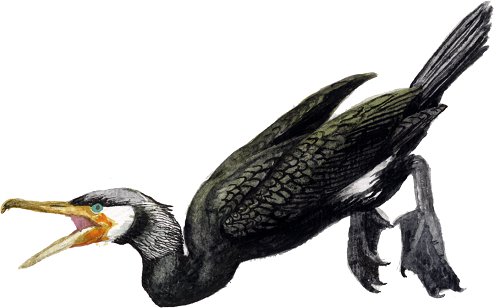 The Great Cormorant (Phalacrocorax carbo sinensis (Blumenbach, 1798)) is a widespread member of the cormorant family and is known by several different names around the world - the Great Black Comorant across the Northern Hemisphere, Black Shag in New Zealand, the Black Cormorant in Australia and the Large Cormorant in India. It is a large black bird that can be distinguished from the Common Shag by its larger size, heavier build and thicker bill. They are mostly silent birds but can produce various guttural noises in their breeding colonies.
These data have been produced as part of the Avian Phylogenomics Project. DNA was collected from a vouchered tissue sample (137943) at the Natural History Museum of Denmark, of a male caught in Gedser, Denmark. We sequenced the genome to a depth of approximately 24X.
The assembled scaffolds of high quality sequences total 1.15Gb, with the contig and scaffold N50 values of 15kb and 48kb respectively. We identified 13,479 protein-coding genes with a mean length of 13.5kb.